How to Cut a 135 Degree Angle on a Miter Saw

Confused about how to cut a 135-degree angle with a miter saw?

Don’t worry, we’ve been there.

Sure, we can knock out 90-degree or 45-degree cuts without a second thought, but throw a more complex angle into the mix when tackling a DIY or furniture project, and we’ve been known to be left scratching our heads for a few minutes!

Thankfully, cutting a 135-degree angle is pretty simple once you understand the correct technique, and that’s what we’ll show you step-by-step in this article.

There are five basic steps you need to complete to cut a 135-degree angle on a miter saw:

Keep on reading as we’ll show you each part of the process in detail, including helpful step-by-step instructions and handy tips.

A ‘Back to Basics’ Geometry Lesson

As a bare minimum, a miter saw should be capable of cutting at 90-degrees to allow for crosscutting and at least 45-degrees both left and right for reasonably acute miters.

Some miter saws, for example, the DEWALT DWS780 that we’ve written a complete buyer’s guide for, can miter up to a whopping 60-degrees.

Thankfully, when it comes to cutting your 135-degree angle, you won’t need anywhere near this capacity, and so, it should be possible to cut this kind of angle on even the most basic saw.

Thankfully, there is a way, and it involves using a series of acute miters (those less than 90-degrees) to cut the overall 135-degree angle.

In our case, we’ll be using two symmetrical pieces of timber (those cut at the same angle) to form our final angle.

Relative to your miter saw’s blade, a piece of timber will form a 180-degree angle when placed against the saw’s fence.

We’ll use this 180-degree angle to work out the acute angle we need as follows:

Based on the above, you’ll need to cut both pieces of timber at 22.5-degrees on your miter saw (or table saw, or whatever else you’re cutting with) to achieve the overall 135-degree angle.

You can use the same process for any obtuse angle (i.e. one over 90 degrees but less than 180 degrees).

The first step is to set your miter saw to 22.5 degrees.

It doesn’t matter which direction you choose here; either left or right will be fine, as long as you choose the opposite direction later on in step three.

Most miter saws, including the one we’re using, will have a specific indent at 22.5° to help you quickly and accurately lock in at the correct angle. It isn’t a problem if your saw doesn’t have this indent.

If it doesn’t, simply gauge the position using your saw’s miter gauge markings and tighten the handle to lock it in place.

Line up your timber in your miter saw, either by using the saw’s laser (if it has one) or by lowering the blade (while it isn’t spinning!) to line it up with your cut line.

Clamp the timber in place once you’re happy with the position, and go ahead and make your first cut. You now have the first half of your 135-degree angle.

Next, move your saw to 22.5 degrees in the opposite direction of your cut from step one.

So, if you cut to the right in step one, adjust the saw to the left now, or vice versa. Whether you’re using your saw’s indent or lining up the miter by eye, don’t forget to lock the saw in position before making the next cut.

As with your first cut, you line up your timber using the saw’s laser if it has one or by checking the blade against your cut line.

Once positioned correctly, go ahead and make your second cut. You now have the second half of your 135-degree angle.

5
Check Your Cuts for Alignment

The final step is to place your two 22.5° cuts together to check their alignment.

If you’ve followed the steps correctly, you should be left with a 135-degree miter angle, as shown here.

(We use the Trend DAR200 to check our angles – it’s a handy tool and we’ve found it to be very accurate. You can find it on Amazon here). Whether you’re using dominoes, dowels, screws, or simply glue, you can now go ahead and join the two pieces together to finish your 135-degree angle.

Cutting a 135 Degree Angle on a Miter Saw – Another Option

While it might save a bit of brainpower, it’ll take more cuts overall versus the steps above, and the end result arguably doesn’t look as clean, so it isn’t our preferred option.

First of all, cut your stock at 90°, as shown here. This will form the first part of your 135-degree angle. Next, set your saw’s miter gauge at 45° and make your second cut. Our main issue with this method stems from the fact that the two pieces don’t line up cleanly, as shown below.

As you can see, despite using the same size of stock for both pieces, the cut face of the 45° piece is larger than the face on the 90° piece.

Because of this, you’ll need to complete a third cut along the blue line shown below to tidy up the final 135-degree angle. Once you’ve cut along the blue line, you can then go ahead and join the two pieces to form a permanent 135-degree angle.

Aside from this additional cut, another issue we have with this method versus the one above is the asymmetrical joint you get from joining two different cut angles.

It’s personal preference, really, but if we can end up with a joint that looks cleaner from fewer cuts, that’ll be our go-to method.

For this reason, we’d recommend bypassing this option and cutting two 22.5-degree angles instead.

The process is the same in terms of completing a series of cuts at 22.5°.

Where it differs slightly, though, is that you’ll need to keep the crown molding elevated during each cut.

We’d recommend watching the following video, which covers the process of cutting crown molding at 135-degrees in detail: 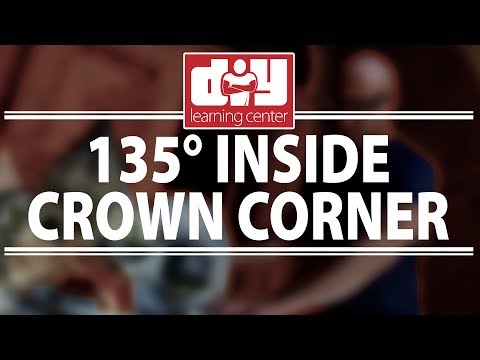 We hope we’ve shown you just how easy it is to cut a 135-degree miter.

From crown molding to furniture projects, you’d be surprised just how common this tricky angle is in woodworking and DIY. Thankfully, you now know how to create clean, accurate miters at 135-degrees with minimal fuss.

It’s worth mentioning that you should always follow the manufacturer’s guidelines for whatever tools you’re using, and don’t forget to read the instruction manual thoroughly to avoid any safety or maintenance issues down the line.

If you have any questions on this article, leave us a comment below and we’ll get back to you as soon as we can.